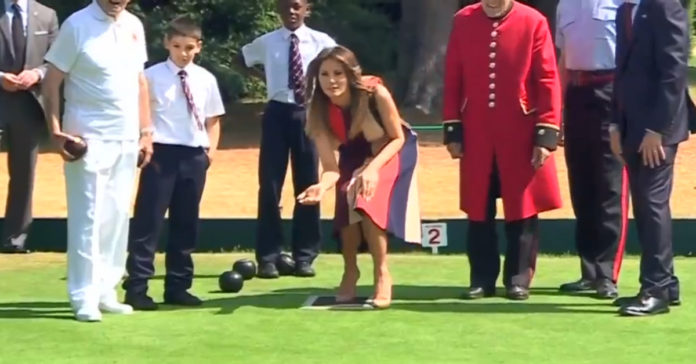 Melania Trump took Europe by storm with her classy and elegant behavior. Europe is still a bit more formal than America and the media bashed Trump for his blunt talk.

Melania, however, was all class on the trip.

While President Donald Trump may have made the headlines in England on Friday, Melania once again stole the show. And this time, it was making an amazing move for British veterans — one that even included a bit of lawn bowling.

According to the U.K. Evening Standard, the first lady made a detour Friday to Royal Hospital Chelsea, a retirement home for members of the British army.

She was hosted on the visit by Philip May, husband of British Prime Minister Theresa May.

Both Melania and May toured Royal Hospital Chelsea’s chapel. Then, they joined local schoolchildren, where Melania was instructed how to make paper poppies. Remembrance poppies are considered the symbol of commemoration to Brits who died in war.

“Mrs. Trump, 48, greeted the children with a cheery ‘Hello!’ and a big smile,” the National Post reported. “She shook their hands, and asked one of the kids to show her how to assemble a poppy pin.”

“She then sat down with three veterans and 10 children for a short group discussion, as part of the first lady’s ‘Be Best’ campaign, rolled out in May, which focuses on teaching kindness to children and childhood well-being.”

The best was saved for last, with Melania playing a game of lawn bowls with May and the veterans.

First lady Melania Trump and Philip May enjoy a game of bowls during a visit to the Royal Hospital Chelsea in London pic.twitter.com/Y8vThbV3t9

The first lady met with school children who showed her how they make poppies — a British symbol in that stands in tribute to fallen service members — that are sold to raise money for veterans on Armistice Day and, in an apparent nod to Mrs Trump’s “Be Best” initiative that promotes children’s interests, chatted with a group of kids about their efforts to be the best they can be. Trump, who took direction from a young girl, made a poppy of her own and could be seen later handing it off to a staff member for safe-keeping.

First lady Melania Trump heads to London’s Royal Hospital, where she met with school children who showed her how they make poppies, a British symbol in that stands in tribute to fallen service members. https://t.co/zVnZWs28yf pic.twitter.com/ReMkmFGqHU

Hillary Clinton Tries To Bash Melania Trump, Gets Humiliated Instead

After Reporters take POT SHOTS at Melania, WATCH Sarah Swat Them Down Like Flies