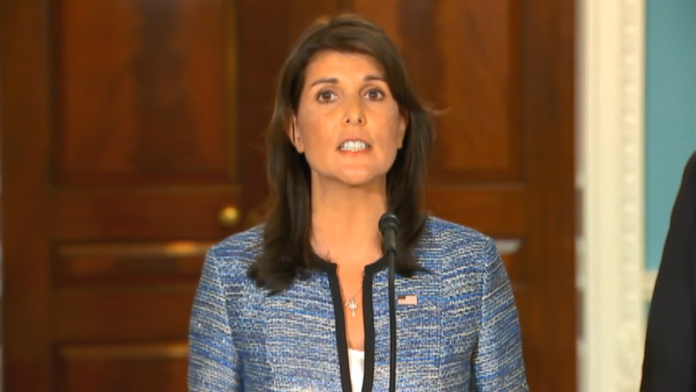 The media only has eyes for Trump, specifically negative stories about Trump. But believe me there is plenty of great news coming out of the TTrump administration these days.

Case in point the quiet but steadfast work of Nikki Haley at the UN. The UN has long been a thorn in the side of the GOP with many questioning our relationship to it.

So Nikki was in a tight spot and she has exceeded expectations. From Fox News:

As part of Nikki Haley’s push to advance the Trump administration’s “America First” agenda at the United Nations, the hard-charging ambassador is fighting for U.S. businesses to get a bigger slice of the more than $18 billion in contracts the world body hands out each year.

The U.S. already is the biggest recipient of these procurement contracts, but officials say that number is growing since Haley took office. In 2017, the U.S. won $1.74 billion in contracts — approximately 9 percent of the $18.6 billion available. The next highest was India, which picked up 4.8 percent of all contracts.

That marks almost a 10 percent uptick in contracts awarded to U.S. businesses from 2016.

But Haley and the U.S. Mission aren’t done, and are looking at ways to get more lucrative contracts awarded. It’s part of a broader effort by Haley and the Trump administration to make sure the United Nations’ biggest contributor gets a better deal there.

“We are very proud of our American companies, from the quality of their products to the efficiencies of their services. We will continue to use all of the resources we have available to help our companies win U.N. contracts,” Haley told Fox News.

Her office is not necessarily strongarming the U.N. into awarding contracts to American companies — it is a competitive process — but is urging those companies to seek U.N. business while facilitating meetings between them and U.N. officials.

Cherith Norman Chalet, the U.S. representative for U.N. Management and Reform, told Fox News that the U.S. Mission is increasing the number of seminars across the country that feature business representatives and officials from U.N. agencies, including UNICEF and the World Food Program.

“It’s to try to help companies understand the process, what the opportunities are at the U.N. and what the needs the U.N. are looking for, so really trying to matchmake in the best possible way,” she said.

RT @USUN: In two years we have reduced UN spending by $1.3 billion. Thanks for the shoutout Mr. President. Proud of Team USUN! pic.twitter.com/FcUVmr4oyW