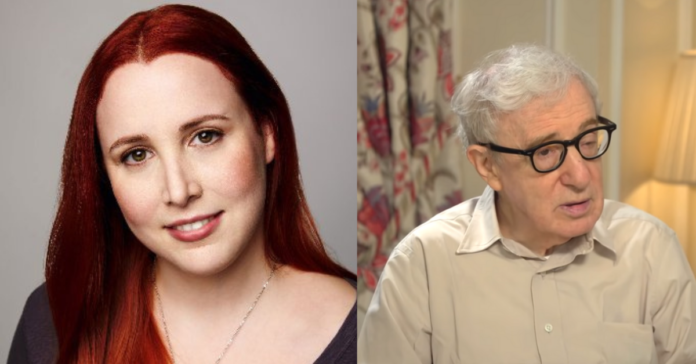 Another Hollywood legend just fell from grace and he will never come back (if he is not prosecuted) after what his adopted daughter Dylan revealed last night in the shocking HBO documentary “Allen v. Farrow.

Dylan allowed HBO to play a video her mother made when she was seven years old detailing abuse at the hands of Allen, and with the other creepy if not criminal behavior Woody displayed in other parts of the documentary these allegations are more than credible.

The seven-year-old Dylan says on tape that Allen told her, “Do not move, I have to do this,” and then touched her private area. Dylan said, “I didn’t want him to do it, mama. I didn’t like it.”

Speaking as an adult in the documentary, Dylan Farrow stated, “We were in the TV room and he reached behind me and touched my butt, and then he told me to come up to the attic with him. I remember laying there on my stomach and my back was to him so I couldn’t see what was going on. I felt trapped.

“He was saying things like we’re gonna go to Paris together; you’re gonna be in all my movies. Then he sexually assaulted me. I remember just focusing on my brother’s train set and then he just stopped. He was done. And we just went downstairs. I am that little girl on the tape. So it’s a very vulnerable part of me, and a very a very hurt part of me. There’s a lot of that little girl is in a lot of pain.”

I’m writing this, because to be totally honest I have been losing sleep and overcome with anxiety. Tonight’s episode of the Allen v. Farrow docuseries features a video of me as a seven-year-old child disclosing my abuse to my mother. My mother gave me this video when I became an adult to do whatever I wanted with it. It shows me as I was then, a young, vulnerable child. “Little Dylan,” whom I’ve tried ever since to protect.

Deciding to allow this tape to be viewed now publicly in this way has not been easy. I myself had resisted ever watching it until now. It had been long stored away in a closet. Scared. Buried. I almost didn’t offer it to the filmmakers, because being this vulnerable in public is absolutely terrifying for me. My fear in letting this tape come to light is that I am putting Little Dylan in the court of public opinion.

While I have been able to take the stones thrown at me as an adult, to think of that happening to this little girl is stomach-churning.

But I decided to let them share it in hopes that Little Dylan’s voice might now help others suffering in silence feel heard, understood, and less alone. And that my testimony might also help parents, relatives, friends, loved ones and the world in general understand first-hand how an abused child might speak and interpret these horrific events.

There’s a third reason as well. Personally, I had, for decades, pushed “Little Dylan” away as a coping mechanism. So part of my goal in allowing her to now speak is also to try and find some healing for me and my childhood self. It’s an attempt to make them whole again, and find some peace and closure.

Ever since news of her abuse was inadvertently made public, I, my siblings, and my mother have all been subjected to an endless barrage of vitriolic slander and baseless rebuke; derision so painful that I separated myself from her in self-defense. I hid her away in the closet with the tape too— hidden, afraid, sad and hurt.

If you watch this video, I very much hope that you will do so with empathy, compassion and an open mind and heart and not use this as an opportunity to attack, turn away, criticize, mock; or to further shun “Little Dylan” and in doing so shame and silence the millions of abused children who are suffering in the world today. This is the most vulnerable part of who I am.

I hope this tape helps us all find ways to allow painful secrets to come safely out of their closets so we all can heal and move forward in strength and peace. No longer ashamed, buried, scared, sad, and silent.

Thank you to everyone for their kind words, the outpouring of support means more to me than I can say ♥️ Speaking the truth is so difficult, but I hope any fellow survivors who watched last night know they are not alone. The truth is something that cannot be changed.