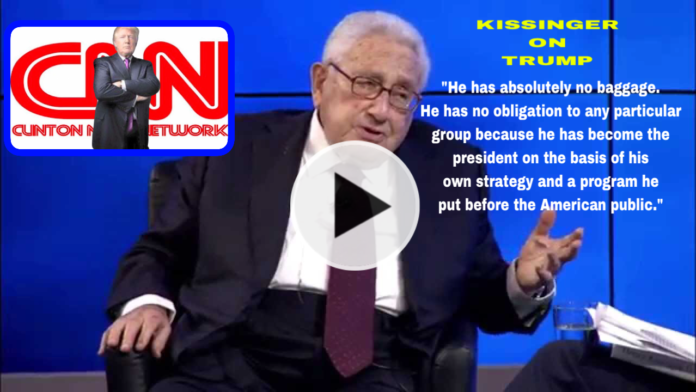 Share on FacebookTweet
When 92 year former Secretary of State Henry Kissinger went on CNN’s Fareed Zakaria GPS Sunday to discuss his Friday meeting with President-Elect Donlad Trump the host tried to tried in vain to steer Dr. Kissinger towards criticizing the President-elect.  Dr. Kissinger would not go for the bait.  He was extremely diplomatic (pun intended).  (VIDEO BELOW)

Donald Trump and Dr. Henry Kissinger met in New York on Friday.  According to the official Trump statement: “President-elect Trump and Dr. Kissinger have known each other for years and had a great meeting. They discussed China, Russia, Iran, the EU and other events and issues around the world.” (VIDEO BELOW)

“I have tremendous respect for Dr. Kissinger and appreciate him sharing his thoughts with me,” President-elect Trump said.(VIDEO BELOW)

Kissinger and Trump met previously back in May when Trump became the presumptive Republican nominee.  At that time Kissinger’s primary criticism of Trump’s campaign platform was his proposal to ban all Muslims from entering the U.S., urging him to make such a blanket exclusion.  Trump has changed his position to one of extreme vetting from countries in question since then.

In the interview above Dr.  Kissinger noted that “Not enough attention was paid to the fact that [Globalization] was bound to have winners and losers, and that the losers were bound to try to express themselves in some kind of political reaction.”

“This president-elect is the most unique that I have experienced in one respect,” Dr. Kissinger said…. “No baggage. He has no obligation to any particular group because he has become a president on the basis of his own strategy and a program he put before the American public that his competitors did not present. So that is a unique situation.” 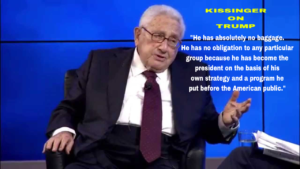 “I’m not here as a spokesman of the president-elect,” Kissinger said. “I’m here to answer questions of my impressions of [him]. There is the impact of globalization, and I wrote minor things about that earlier. Not enough attention was paid to the fact that it was bound to have winners and losers, and that the losers were bound to try to express themselves in some kind of political reaction.”

“In my view in the present situation, one has to –one should not insist on nailing him into positions that he had taken in the campaign on which he doesn’t insist. If he insists on them, then of course this agreement will become expressed, but if he develops another program and leaves the question open of what he said in the campaign, one should not make that the desired development.”

“I think we should give him an opportunity to develop the positive objectives that he may have, and to discuss — and to discuss those. And we’ve gone through too many decades of tearing incumbent administrations apart, and it may happen again, but we shouldn’t begin that way. And we shouldn’t end up that way, either, but — so that would be my basic view,” he said.

President-elect Donald J. Trump is doing what’s right for this country not just for himself. He’s meeting with former’s Secretaries of State, rival party members and even folks like Mitt Romney who were horrible traitors to him during the election because he wants what’s BEST for this COUNTRY.  This is something Obama or Hillary Clinton would never do.

The CROOKED MEDIA is trying to hide all the good work President elect Trump is doing. Please SHARE this article with as many people as possible!!  Thank you.

sident-Elect  Trump thanks you for your vote!